We have been working at various sites at the State Fair for many years. My foothold in began with painting at Buck Hill Ski Resort where I was surprised to find the Owner of Buck Hill also owns the Sky Ride at the Fair and had us paint the cable towers and buildings of the ride. 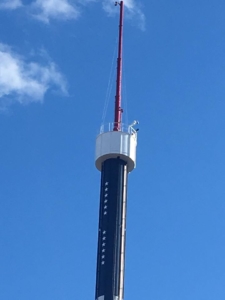 With our exposure out there, we were contacted by KSTP Channel 5 to paint their radio tower, Fresh French Fries to paint their buildings and various other small projects.  We were recommended to the Owner of the Space Tower by our Sky Ride Owner and he called me to meet and explain the scope of the work needed.

The scope of work was to access, prep & paint the massive red spire on the top of the tower along with the Crow’s nest and safety railing. From the ground to the floor of the Crow’s nest is 320’ and the needle from base to tip is another 60’.  Our challenge was to construct scaffolding (brought up from the ground) on the floor of the Crow’s Nest all the way to the top of the Needle.  The last time it was done was 40 years ago and no one could remember who did it.

On our first trip to the top, the Owner made sure we brought our camera phones for selfies as he stated, there aren’t many people who have made this trip.  We had to climb a ladder to get on the roof of the ride cabin while the ground operator raises it to the top.  From there you have to climb into a small man hole to the inside of the tower where there is a steel rung ladder to climb up approximately 20’ to another small opening that leads you to the underside of the Crow’s Nest.  The last step is maneuvering your way up the side of the Nest and onto the floor of it. 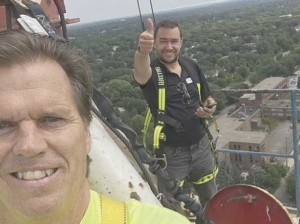 Obviously, this is one of those Legacy projects where there really isn’t any point of reference to formulate a bid.  Fortunately, we brought a team of some of the most experienced access and production personnel that worked together and put together a process and plan that was accepted and implemented.  Once the needle was scaffold, our painting team took over – it was interesting to see that the guys on the project had really pressed their case to be part of such a once in a lifetime event.  The toughest part (other than getting to the top each day) was the movement in the tower itself.  It was hard to believe how much it could sway and motion sickness was a big problem throughout.  It was a challenge because the project couldn’t start until after the Fair run and weather was a big factor as we got further into the Fall.

Like before, this project being so high of visibility got us noticed by another major attraction – the Chair Glide – which we will be doing between the Back to the 50’s Car Show and the start of the 2019 Fair. 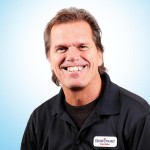 In 22 years, Larry has fostered Fresh Paint from its beginning as a small, residential company into one of the leading commercial contractors in the industry. As well as being the poster child for the value of hard work, Larry is also a devoted family man. He aims to bring a high level of professionalism and personalization to every job Fresh Paint performs.